This weekend we decided to get our festive on and the location of choice was Bluewater shopping centre in Kent, UK. To be fair the main purpose of our visit was to go to the new Dinotropolis attraction that’s just opened although it would be rude not to get into the whole Christmas spirit thing and have a little shop whilst there. Like the bell-end I am I booked the tickets for Dinotropolis on Black Friday at school kick out time and panicked that we should have left at least ten hours to do the 30 minute journey and an extra five hours to find parking but to my surprise we sailed through, yippee (I say that, we were still late but only by 5 minutes which isn’t bad for us!).

I did wonder whether my daughter, at aged 9, would be a bit old for this but I needn’t have worried as she had a blast (although I’m thinking that we are time limited for such activities now as she is growing up fast). The main focus of the attraction is a tiered soft-play centre with a Jurassic theme bordered with huge animatronic dinosaurs that move and roar which add to the ambience and made for a giggle.

Once, we were settled into the café, Moo disappeared like a rat up a drain pipe. I assumed she went straight to the soft play centre but after I did not see her for a while I ventured in myself to try and find her. The soft play area has some really good features and so I started to snap some of them before quickly remembering that a lone adult in a play area taking photos is never a good look so I refocused on finding the child. I eventually located her in the one place I neglected to look assuming she would find it too “kiddish”: the colouring area.

This area offers free dinosaur templates for the children to colour in and then – this is the bit that attracted my techno-obsessed child – the children can scan their pictures, and the image complete with their name will be transposed onto two big screens. This fascinated Moo who then could watch ‘her’ dinosaur become animated and move about the landscape with its dino peers. Needless to say one of the peers was mine ‘cos I had to have a go: 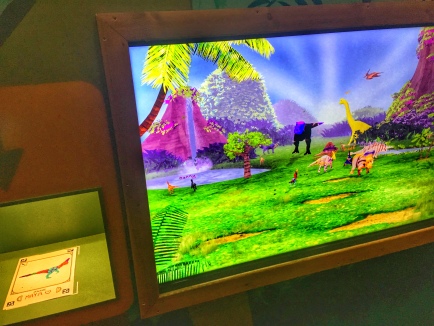 After this we went to the sand pit. I wont profess to know how it works or what fancy technology is behind it but it has some super fascinating images projected onto it. Think dinosaurs and stuff. Obvs. The sand would also turn blue if you dug down and then would become a volcano if moulded into a mound shape. This seemed to really attract the little ones…and a few adults (again, me).

I usually despair of soft play. To me, it’s one of those places where you pay in both money and a piece of your soul for your senses to be absolutely assaulted. However, I loved this play centre namely because half the people in it were adults. I don’t know if the centre manages its numbers going in to avoid chaos but the place seemed really calm and there was lots of room to play cue the parents getting stuck in. So, getting stuck in I bloody well did! Moo and I had fun climbing on a massive bouncy ball, shooting each other with foam balls, and walking over the see-through (Perspex) floor. To be fair I peaked once I went down the twisty slide and realised I can’t cope with a thrill ride anymore, lol. 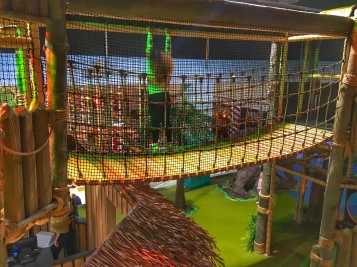 Once done with soft play, we checked out the laser room where the children are timed to make it through a course. This was pretty cool and apparently the centre will be updating this shortly with a competition element so you can try and beat your score etc. which is definitely needed as there is an additional £5 price on the basic entry ticket to use this part of the attraction (pretty steep I’d say).

Entry is for 1.5 hours and we went for the Ranger Pass at £20 for Moo, and £5 for me. This included a meal deal for Moo and to be fair we needn’t have bothered with that and gone for the access all areas pass (without food) at £15 instead. I had assumed that booking for early evening would mean a hot meal for her (and I would just buy a hot meal for me as there is hot food available) so I saw this as a cheaper alternative to us eating at a restaurant in the main shopping centre before late-night shopping, but it was actually just a sandwich, crisps and drink so that was a bit of a (costly) rooky error.

I’m not gonna lie the attraction is pricey and if I had more than one child possibly out of my budget. However, Moo and I made the most of it and had a really fun trip particularly because it allowed us to both join in and that was worth my £5 entry alone!