My little one turned ten recently (have I mentioned that yet?!) and I am sat here with a well deserved G&T after the whirlwind of throwing yet another birthday party. Over the years I have been asked lots – accompanied by looks of horror – about why I always choose to throw birthday parties at home, well put simply, it’s because I’m a single parent. When my child was little it was nigh on impossible to look after a little one and run everything needed (to throw a party) to a hall so that’s why I threw them at home instead, and it’s kind of stuck. It’s also cheaper than hiring somewhere but that’s not so much of a driver as parties can be just as expensive at home too (as I learnt those years when I went a bit OTT!). So, yup, it’s safe to say that over the last decade I’ve honed my party throwing skills and have come a long way from  madly raiding the local Co-Op for a chocolate cake as I did for Moo’s first birthday! So, I thought I’d share some of what I have learnt along the way…

I first threw a kids’ party when Moo was aged three and almost buckled under the pressure when I ended up with a house full of people and a load of tiny eyes looking up at me expectantly. It was at that moment I naively realised that I had to actually ‘do’ something and couldn’t just get away with leaving them to it. Talk about a sweaty top lip. Not helped by my daughter’s childminder – an absolute whizz with kids, obvs – pissing herself in the corner at my ‘rabbit in the headlights’ look! Plus the music temporarily stopped working and so I had to manically improvise. So my top tip would have to be: have a plan B, C and possibly D up your sleeve!

Also, be aware that children’s games can actually go quite quickly so have plenty in mind as two hours (the typical window for a children’s party, I’ve found) can seem like a looong time when you’ve got a group of children and adults looking up at you with ‘over to you‘ stamped on their faces! At that age, we played the typical pass the parcel, musical bumps/chairs etc. and the children loved it. Plus, these games are super cheap as you only need to raid Poundland for some cheap prizes/sweets. I spent hardly any money that year and had no theme as, to be fair, children that age are so easily pleased! We ended the party with a piñata and it was the first and last time I used one as it was impossible to break it without us ultimately ripping a hole into it to start the kids off. Children that age just don’t have the strength for it and the poor sod holding it took a bit of a beating too lol! 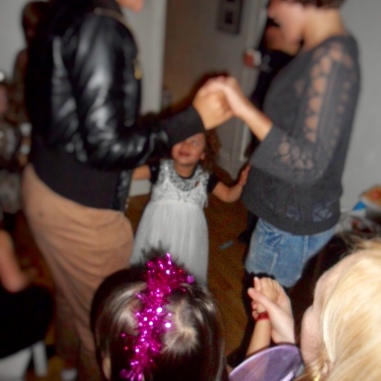 I started theming the parties at age 4 as Moo was big into pirates then so we had a ‘princess and pirate theme’. That also worked well as back then my little pirate was equally happy to play with boys and girls (now she’s a ‘girls only’ kinda kid). Parents also tend to stay at parties at that age – rather than ‘dump and run’ – so you need to make sure you have plenty of room for them too (and wine – seriously, I like to make parties as much fun for the adults as for the kids!). I’ve always found rearranging the furniture before the big day helps in terms of planning as there’s always so much to do on the day. I learnt that at this party as it caught me short and I had my brother madly buttering bread only a few minutes before people arrived: preparation is key!

This theme was super easy to cater for too as pirate outfits for kids are two a penny and I just popped on an old red top with a skull scarf, some hoop earrings, and that was me done! I also bought a load of toot off Ebay such as inflatable parrots, a mock fishing net that I filled with balloons and suspended from the ceiling, and a load of shells and pirate confetti. Simple but effective (and cheap: cheap is good, cheap is very good!). The shells also got recycled in to art and craft projects later so #winning 😉

My favourite bit was the treasure chest cake I ‘made’. To be fair, I had never attempted to make a birthday cake at that point so I left the actual baking to Asda lol! I literally then plonked the rectangle chocolate cake on one of those tacky gold cake boards, grabbed a chopping board which I wrapped in tin foil to act as the ‘lid’ which I then covered (top only) with piped chocolate frosting and secured the ‘lid’ in place with metal skewers. I then literally draped some costume pearls across the cake for treasure and scattered gold chocolate coins and jelly sweets all over it. I finally secured a jelly sweet that roughly resembled a ‘key lock’ to the base of the cake and there was my treasure chest! 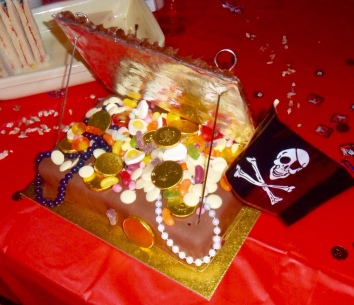 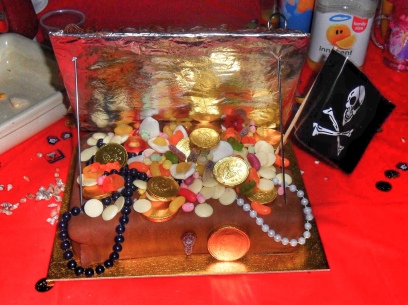 Moo loved it! To be fair it looked good on the surface but if you looked closely it was rather naff as the bottom of the ‘lid’ was secured by a couple of paint brushes round the back of the cake to stop it from slipping which you can see in the pictures below! Oh well, at that age kids don’t really notice such things: they only see the ‘magic’ and my pirate sure felt she had gone to Neverland. Her little cousin wanted the cake so much she went to grab the table cloth to pull it towards her almost pulling it off the table needing my brother to swoop in. Oh the happy memories of a tantruming child: what every kids party is made of lol!

So there you have it. I’ve done many a party since then and each time they get easier and a little more refined lol! The next few years were heavily princess-themed so I will do a separate blog post for those. AND I venture into baking my own cakes so I’ll share those too. I bet you can hardly wait lol! 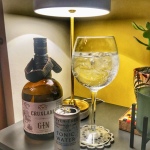