No-one tells you when you have your first child that at some point they start to raise you, instead of the other way around. That the predictable routine of you being the care giver starts to tip on its axis and your dependable little dependent will start to race ahead leaving you standing in their wake thinking to yourself: “what the fxxk is going on?”. As a new mum you joke that nobody gives you a hand book when you have a child but steadily you realise that you are the handbook. You make the rules, the mistakes and somehow find your way. Then, just when you are comfortable with this world order, the child threatens puberty, the rug gets pulled out from under your feet and once again you’re flailing. This is where I am at and, if I’m honest, I panicked at the thought so I did what any self-respecting, avoidant parent would do when facing the whole puberty/birds and bees chat (god forbid): I bought her a self-help book about her growing body. Turns out though, it was a bloody genius idea! 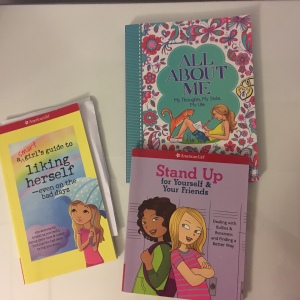 This isn’t our first foray into ‘help’ books as I follow a fabulous blog (on Facebook) called: ‘A mighty girl’. The blog often recommends helpful reads for young girls across a variety of issues and so I have purchased a couple of books on (other) subjects that freak the heck out of me, such as bullying and self-esteem. We agreed that we would mostly read these types of books together so that a) I can get a gage on where she is on emotional matters and b) it will hopefully help kick start conversations on sensitive subjects (chatting in the car is also well renowned for helping kids open up more and that’s something else we do lots). I also feel it acts as a tool when she is upset about stuff as reading these types of books helps her feel like we are doing something in response (click here for book ideas for younger children).

Funny how I can communicate with other people’s children about sensitive things but when it comes to my own child I want to run for the hills so I’m grateful for any support I can get too! That said, now that we are up and running, I seem to be responding with a lot more confidence in my daughter’s interest in puberty (although still very much learning as I go about how to respond to it: I mean, the mood swings are intense already and she’s not even a teen yet!).

To be fair my nine (almost ten) year old seems to be leading the way in learning about her changing body and she positively devoured the book on puberty. We decided that she would read this one on her own (as she got a bit giggly at some things: penis hehehe!) but on agreement she would highlight anything she wished to either remember or ask me about (she highlighted most of it, ha!). I’ve included a stock photo of the book below as it turns out the actual book’s on loan to one of her friends. It seems her little group of friends were all asking similar questions and Moo decided to take the book in to school one day and became the pied piper of puberty knowledge among the year 5 girls (seriously though, FML, I seriously hope the parents are on board with her sharing this info as I can’t be doing with an irate Brenda giving me ‘tude on the school run!). 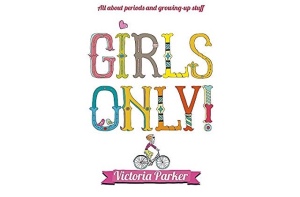 I can’t rate this book enough really as it’s helped give Moo the confidence to randomly ask me things about puberty which is fabulous as I’m a strong believer in communication being the key to us surviving what I envisage to be the bleak landscape of the teen years. And as awkward as it feels for me to watch her change and become different (yet still so familiar) I can only guess it will be more awkward for her. I see this in how she deals with the word ‘sex’. Whilst the book does not go into this other than to refer to a ‘special cuddle’ that makes a baby, Moo knows there’s more to it; she just doesn’t know what yet. We chatted about this a while back and she told me she does not feel ready to hear more yet but will ask when the time is right (turns out that’ll be imparted as part of the year 6 curriculum next year so she needs to make it snappy!).

I know though that I dare not assume anything with her as with most teens what you see on the outside is not what is always on the inside. And sometimes it can only take a few knocks from outside influences (that become more and central to kids as they grow and develop) to make their burgeoning confidence shoot off into the recesses. So I feel I need to set good habits now for us. That’s why the other day when Moo repeatedly stumbled over the word ‘sex’ (when telling me about the pending sex ed) before breaking out into a fit of giggles and hiding under her duvet, I felt I needed to deal with it. Especially because this carried on whenever I broached the word so one night I lay next to her and I told her that I intended to repeatedly say the word ‘sex’ calmly and quietly until she got used to it, and that I would like her to join in when, and if, she felt ready. To be fair, it was like trying to coax a mole out of a hole initially but she soon managed to say it and we lay there like idiots repeating it (god knows what the grandparents must have thought as we were in their house!!). Now that the ‘mystery’ seems to have gone from the word – as she can now say it – I hope she will feel more able to talk to me when the time is right. 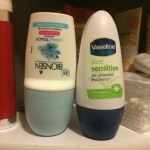 So yeah, going back to my original point, it seems we’re back to making new rules of engagement to hopefully survive this next stage. I can’t say I’m confident it will be plain sailing (it won’t be). And I’m already ‘gin’u’wine’ly worried about the transference on my liver that this process may have on me!! But, baby steps, and all that. Btw, the feature photo on this post is of my daughter’s first deodorant which she was so proud to have that she lined it up and (unnecessarily) tipped it upside down to sit alongside mine so they matched. That was one of those heart-squeezy, cute moments and I’m hoping that I can be as fist-bumpy when she one day rocks up with a face full of piercings (she’s already told me what she intends to get done). Right, where’s that gin…